How He Did It: The Proposal

After promptly announcing my engagement on Twitter and Facebook on Monday night, admist all the “congratulations” (smile!), “finallys” (rude!) and “when’s the wedding” (uhhhh I dunno!) there was the inevitable question: “How did he do it???”

So, I decided to post the story on my blog for inquiring minds who want to know how my wonderful fiancee proposed to me on April 25, 2011.

On April 22nd, I turned 25. I knew I would be spending that day in DC with friends, so my boyfriend and  I decided beforehand that we would go to a dinner and a movie when I returned.

I wasn’t supposed to come back to Columbus until Saturday night, but I ended up having to work Saturday morning, so I returned home early. When I got back home, Saturday was busy and Sunday was Easter which meant church all day, so my boyfriend  and said he would give me my gift on Monday night when we went to dinner.

On Monday, he promised to pick me up from my apartment at 6:30pm. He called me at 6:29pm and asked if I was ready (of course I wasn’t, when am I ever???).  He said 0ver the phone “Okay, I’m going to give you your gift now. Look underneath the table in your room.” I was bewildered, “When did you hide my gift in my room???”

Where he hid my first "instruction"

Under the table in my room was a pink&green gift bag with a balloon tied to it. Inside was a card a small pink can of huge green thumbtacks. 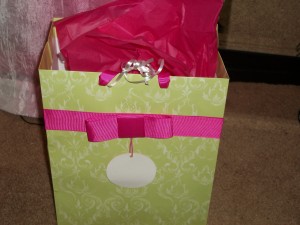 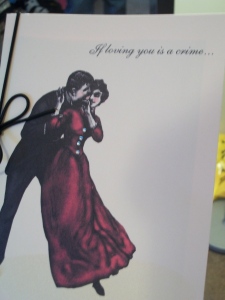 "If loving you is a crime" 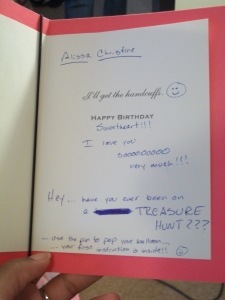 I'll get the handcuffs. LOL

I read the card and on it were instructions to use a thumbtack to pop the balloon for the beginning of my “treasure hunt”.

A note inside the balloon instructed me to go to Walgreens by his house. (He and I live about eight minutes away from each other.) I went into Walgreen’s half-expecting the girl working at the photo desk to give me a balloon after I said I was there to pick up a photo for Joe Henry. She didn’t. She handed me my picture, said it was pre-paid and told me to have a nice day. (Little did I know how NICE the day would turn out).

The picture instructed me to go to his house and look at his calendar on the wall for my next instruction.

I drove to his house, parked and walked in announcing “Joe, it’s me!” His roommate called back “Joe’s not here. He just left.” I knew he was up to something at this point, but I still didn’t know what. Next to the calendar lay two long stemmed roses and an open box of a dozen of assorted chocolates.

Two balloons were taped to either side of the calendar. The calendar instructed me to pop the balloons.

I popped the balloons and there was a note telling me to check my Facebook. I pulled out my Blackberry and read the posting Joe put on my wall. 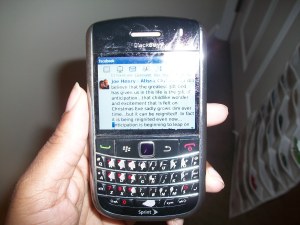 At the end, it said to look in my glove box in my car for my next instruction.

I ran to my car, threw open the glove box and saw another small square white envelope with a white ribbon tied around it and my name written on the front of the envelope.

I tore it open and it said: Meet me at Coldstone Creamery. 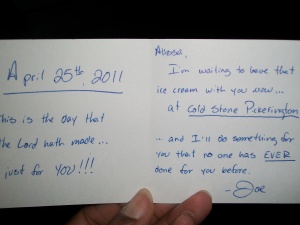 I jumped back out of the car, ran back into the house, grabbed a piece of chocolate out of the box and got back in the car. I drove as fast as I could to Coldstone Creamery – and heard Beyonce’s “Run the World (Girls)” for the first time on the way. (As a sidenote: I loooooove Coldstone Creamery. Joe and I fasted sweets for our 40 day fast and had planned to go to Coldstone once the fast was over, but we hadn’t had a chance to go yet.)

I pulled into Coldstone, got out of the car and Joe was sitting outside on the bench holding a huge bowl of icecream with one of those chocolate and peanut crusted waffle bowls inside of it. I sat down next to him breathless and laughing.

He stared at me with a huge smile on his face.

I was so confused. I wanted to say “Where’s my gift?” Lol. Then I wondered if him sitting in front of Coldstone was my gift (and the cute thumbtacks and chocolate and flowers). So I just smiled and started eating the ice cream he was holding. We small talked for about two minutes between bites.

My mouth dropped. He was calling my mom!

He asked my mom for her permission to marry me and I started SCREAMING. Apparently my mom started screaming too. I jumped up, covered my face, and just started laughing and crying at the same time as he pulled out the maroon box and got on one knee. 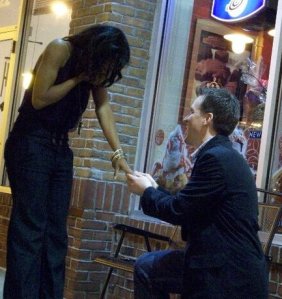 Apparently, he told the people in Coldstone what he was going to do beforehand and I’m sure they saw me and heard me screaming cause people started coming out of the restaurant to say Congratulations! Lol.

It was the best proposal ever from the greatest man this side of heaven.

I can’t wait to marry him. I haven’t stopped smiling in two weeks 🙂

← If You’re Happy And You Know It Clap Your Hands!!!
The Wedding Dress Search Is On! →

26 Comments on “How He Did It: The Proposal”