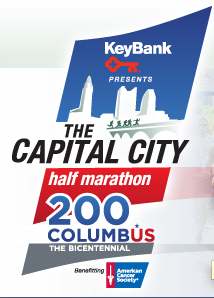 Several days ago, I ran my first quarter marathon. I was going to run the half, but I’ve never run in an organized long distance race, so I figured I would start out small.

Last year (and at the beginning of this year), I used to run all the time. I didn’t run particularly long distances all at once, but I ran most days and totaled roughly 8-12 miles per week. The longest I ran without stopping was four miles and that was only once. However, I figured I would build up to running 7-8 miles per day and thus be more than ready for the quarter marathon.

Then I got married.

Every newlywed has different experiences, but for me personally it has been so difficult to get back into my exercise-every-day groove since I’ve tied the knot. I like to exercise first thing in the morning and that used to be so easy for me to get up super early and head to the gym. Now? Now, my alarm goes off in the morning and I have to decide if I’m going to get out of bed or snuggle closer to my sleeping husband. My husband wins every single time. So, in the three months between my wedding and the quarter marathon, I think I ran twelve miles total.

Still, I had signed up for the quarter marathon and, more importantly, paid to run it so there was no backing out.

I was so crazed with nervousness the day before the race that I was literally shaking at the thought of running. I decided I would run as much as I could and walk the rest. This resolve disappointed me because when I signed up, I had planned to run the whole thing. I figured walking it would be better than staying at home altogether.

And I am sooooo glad I participated. The Capital City Quarter Marathon has to be one of the best running events ever. Granted, I’ve never participated in any other organized run, but I can’t imagine having a better experience.

The day before the race, I went to pick up my registration packet at the Health & Fitness Expo. (There was also some sort of “Hell City” expo going on at the same time in the adjoining area. Yikes!). The expo was awesome. Vendors were selling all sorts of running equipment from shoes, to headbands, shirts with awesome slogans like “This seemed like a good idea 4 months ago”, and body glide. They had everything! I bought a cute pink headband that says “Gotta Run”. The headband was perfect to keep my headphones in my ears while I was running. I got a free shirt for signing up for the race and I gave it to my husband to wear on the sidelines on Race Day.

Me with the founders of Black Girls Run!

The night before the race, I met the founders of Black Girls Run at a BGR Meet and Greet. This was one of the main reason I signed up for the race. I figured, if BGR was participating this year, I may as well too. Ashley Hicks and Toni Carey started the national group three years ago and Koritha Mitchell, Jan Flowers and Helen Clark run the Columbus chapter. Why was I *totally starstruck* to meet Ashley and Toni? Hilarious! After reading so much about them and seeing them in pictures, when I finally was in the same room, I was staring at them like a kid whose toys just came to life! Haha. They were SO nice too. You know sometimes people seem like they would be cool, but then they are total jerks in real life? These girls were even nicer than I expected. AND they’re my sorors. So motivating and inspiring that these girls turned a hobby into something larger-than-life. It’s ironic because of course black girls run. We all ran track in HS and college, but black girls running long distances is sort of uncommon and I’m glad they’ve encouraged so many of us to get out there and run long distances and generally just be healthy! Oh and David Babner, the director of the race stopped by our Meet and Greet. That was awesome!

Before bed, I ate the most disgusting Steak & Shake burger I’ve ever had and cold fries. Not a great night-before-the-race meal, but it Steak & Shake sounded good at the time. After eating, I stayed up making my entire “Marathon” music playlist. I didn’t want to have to change songs over and over again, so I made a whole list of songs I wouldn’t want to skip while running. (Not foolproof because I ended up skipping songs twice but that’s better than the 15 times I normally have to change songs while running!)

In the morning, I planned to get up at 5:45 and my eyes popped open at 5:15. I was sooo nervous. I just laid there for a few minutes trying to get a little more sleep, but I couldn’t. Finally, I got up, showered and got dressed. I wasn’t sure what to wear but I opted for the shorts a friend got me for my birthday and a tank top I’d bought from the kids’ exercise section at Target. (Sidenote: exercise clothes are EXPENSIVE! Even in the kids section. SMH). I wanted to get fit for new running shoes because my Reebok running shoes are hard on the bottom, but I never found the time, so on the way to the race my husband and I stopped at CVS and I bought some Dr. Scholl’s padding for my shoes. Not a long-term solution, but they worked out great for the race!

When we got there, My husband wasn’t running in the race but he wanted to be there to cheer me on at the start and finish. I was so happy to have him there with me because there were a TON of people at the race site. (Later, I found out 13-thousand people had signed up!) . I had signed up to run the race in an hour so they placed me in the B-corral. A-corral was the fastest and E-corral was the slowest. Because I hadn’t run  in a while, I decided to go to the C-corral instead.

When the gun went off, I  started my phone’s MapMyRun app and music. First song? Colbie Callait’s “Brighter than the Sun” and started running. What I realized later, was that I was so far behind the front of the corral that I started running way before the actual start line so — according to my app — I ended up running 7.13 miles total!

While running, that first mile was thee longest mile of my life! When we got to the first mile marker, I thought for sure it should have been the 4th mile. I could see the other runners who had already made the turn ahead and for a split second, I considered cheating and running across the grass to meet them, but then I realized cheating would only be cheating myself so I ran the course.

By the second mile, my stomach started cramping like nothing I have ever felt. I was nearly doubled over, but I didn’t stop running. Normally, when I workout in the morning, I don’t eat first but I didn’t want to take the chance of passing out so I ate cereal that morning. Not a good plan. I should have eaten hard boiled eggs or a banana or something that wouldn’t cause me to cramp up. It was too late then. I dropped my head, held onto my side and kept running right through the pain. People were walking, but I kept saying I would walk at the next mile.

4th mile: I decided I would walk at the 4th mile, but when I hit that mile it was lined with supporters. People were clapping and holding signs! It was so cool. Even though I didn’t know anyone out there, I didn’t want to look like a wimp by walking so I kept running. 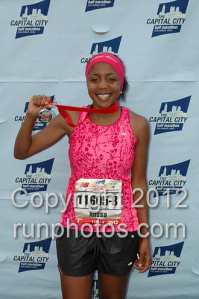 I took a photo after the race not knowing I had to BUY it! Lol.

And I ran all the way to the finish. In fact, when I saw the finish line was about 100 yards away, I picked up speed and started running as fast as I could. That was my high school track girl in me — always kick it at the end!

At the finish line, I got a medal and they had bagels and water and bananas. There was a big finish line party but I was way too exhausted to stay very long.

I still can’t believe I ran 7 whole miles like that, but finishing it was a great feeling!

Now, I see why people are addicted to these races. After running the quarter marathon, I want to train to run a bunch of races now! I want to run the 10K, the half-marathon and even the full marathon before I’m 30.
I’m a quarter of the way there 🙂

I’m definitely buying this one!

← This Black Girl is Running a Marathon!!!
How Do You Write a Cursive “H”? and Other Newlywed Observations →

3 Comments on “My Quarter Marathon Recap”