Joe and I just celebrated our anniversary!

It has been three amazing years since we tied the knot! A lot has happened between then and now, but we still feel like newlyweds in some ways. Then again, considering the fact that we’re going for 60 years, we ARE still newlyweds.

We normally celebrate our anniversary out of town. For our first anniversary, we stayed in a nice hotel in Troy, Ohio. Last year, we stayed in a cabin in Amish Country. This year, because of my injury, we decided to do something in town and low-key.

Coincidentally, I had one of my physical therapist appointments that morning and he said I could try walking without my crutches!

I made it most of the day, but by the evening my foot was too sore to handle it and I was moving way too slow for the frigid temperatures, so I used my crutches the rest of the night. (As of this post, I’m able  to walk without crutches – a little faster and with a little less pain! Yay!)

Joe and I got married at Creekside in Gahanna so we wanted to have dinner at a restaurant in that plaza.  I wanted to go to an Italian place but it shut down so we had The Wine Guy Wine Bistro, Local Cantina Mexican or Old Bag of Nails to chose from. (Creekside is beautiful, but for some reason businesses struggle to stay open there.)

I read great reviews about the Wine Guys food, and they are the nicest of the three restaurants, so we agreed to go there for dinner.

The food was pretty good. They gave us free delicious pita bread with cheese right when we sat down. I live for free bread at restaurants, so I was immediately hooked (unfortunately, however, here you only get one measly serving!). I ordered Linguine and Meatballs and my husband ordered the meatloaf.

Unfortunately, because we didn’t order wine, we got the mediocre service non-drinkers get at these types of restaurants. Oh well! Our waiter was over us from the start, so we got our food and check fast! That was great though because we were able to move on to the main event: COLDSTONE CREAMERY! 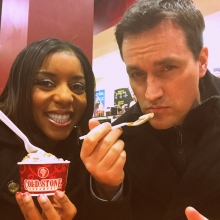 We love Coldstone. Joe proposed to me in front of Coldstone Creamery in Pickerington and we used Coldstone at our wedding both the interior for pictures and the ice cream for guests at the reception. On our wedding anniversary, we visit the location in Gahanna and on the anniversary of the proposal we visit the location in Pickerington. (We visit both all year long in between!)

Right after we got married, Columbus Monthly magazine published a rocking wedding profile on us written by the talented Taylor Swope. (I didn’t get to be in Columbus Bride like I’d hoped, but I’ve convinced myself that being in Columbus Monthly was way better!) The owner of Coldstone in Gahanna framed the article and posted it on the wall. It’s still there today!

Look who it is!

Our anniversary wasn’t quite what it would have been if I didn’t have my injury but it’s always nice to celebrate our love and marriage.

← How to Decorate Your Crutches!
No Sew Formal Dress Fashionable Fix! →